Who or what is Magja Studios? Magja is the artist name of composer and music technologist James Adams. James started Magja Studios as a resource for music technology education, conversation, and musi﻿c sharing. Magja Studios is about sharing music and ideas. It is through sharing and dialogue that we are able to expand our knowledge, develop our creativity, and inspire innovation. 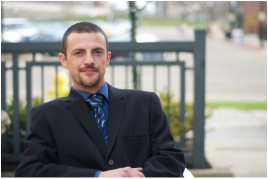 James Adams is a musician, composer, and an expert in audio technologies. He is currently the Director of Sound Recording Technology studies at Stephen F. Austin State University (SFA). Prior to his SFA appointment, he was a technical producer and engineer for incite* a design and production agency in Los Angeles, California. Prior to his role at incite*, he held a Graduate Teaching Assistant position in the School of Music at the University of Akron while completing his Master's in Music Technology. Before joining the team at Akron, James completed his Bachelors in Music at Humboldt State University where he studied composition, piano, guitar, and vocals. Prior to his formal music education at Humboldt State, James received a Certificate in Computer Electronics Technologies from College of the Redwoods and held various engineering and management positions with electronics manufacturers. From 2010-2013, James was an Audio Engineer and Lighting Advisor at the C. Crane Company and contributed to the design and production of several successful audio products. Additionally, he co-founded C. Crane's specialized audio division Center Point Audio. As a professional musician, James was the lead guitarist and vocalist for a west-coast rock group named The Malone. From 2006-2011, the group created over 60 original compositions, had several live radio broadcast performances, and performed frequently throughout northern California.
As a composer, producer, and recording engineer, James has worked with the School of Velocity production group and Humbled Records contributing vocals, guitar, and compositions. In 2015, James opened Magja Studios located in the Santa Ynez Valley in California.. Magja Studios and The Academy of Music Technology is James' dream of an institution dedicated to the discovery and exploration of 21st century music and technology. In addition to being actively engaged in product and music engineering and composition, James' primary focus is to share music and learning through instruction, performance, and research.